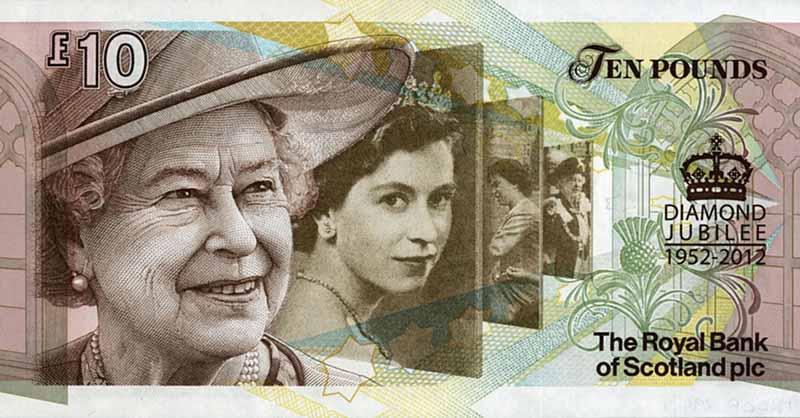 Collecting banknotes with the portrait of Her Majesty Queen Elizabeth II can be very rewarding experience for any collector regardless of their experience in the hobby. There are so many facets to collecting “Queen banknotes” as so many collectors informally but affectionately refer to this area of collecting. The Queens portrait adorns the “issued” banknotes of twenty-nine unique countries and territories and thirty-three if you include countries and territories whose names have changed over the course of her note issues and currently thirty-five if you include those territories which had specimens, proof notes or mockups produced in anticipation of an issue which never happened. The Queens portrait too has changed many times over the course of her reign from her as a princess to portraits depicting the queen as she is now. Fifteen countries still currently issue and circulate banknotes bearing the Queens image in some form on their notes. It is unlikely that there is another theme within numismatics today that is larger, more diverse or arguably as beautiful nor will there ever be again. - Russell Waller 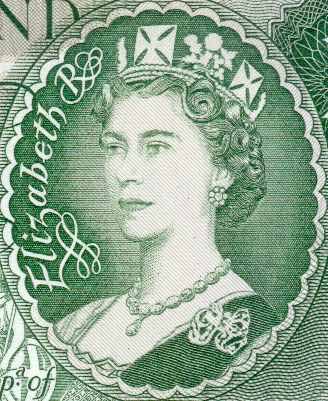 This is the first portrait of a monarch to appear on a banknote issued by the Bank of England. It was drawn by Robert Austin, who was responsible for designing the 10-shilling and 1-pound notes of the ‘C’ series of notes issued by the Bank of England. Austin commenced his portrait by obtaining photographs of Her Majesty at a session in Buckingham Palace on 1 May 1956. The photographs were taken by a senior assistant of Dorothy Wilding. However, the final drawing by Austin was not based on a specific photograph from this session, it was a composite of a number of sources. The vignette on the notes shows Her Majesty wearing the George IV State Diadem, Queen Victoria’s Collet Necklace, Queen Mary’s Floret Earrings, and Queen Mary’s Dorset Bow Brooch. The necklace, which was left to the Crown by Queen Victoria in 1901, contains diamonds taken from a Garter badge and a ceremonial sword. The pear-shaped stone on the necklace is known as the Lahore Diamond. The Dorset Bow Brooch was made by Carrington and Company and presented as a wedding gift to Queen Mary in 1893 by the ‘County of Dorset’. Queen Mary gave the brooch to Princess Elizabeth as a wedding present in 1947. The engraving of Austin’s portrait was executed by R. Godbehear of Bradbury Wilkinson and Company. There was widespread criticism of the portrait when the notes were issued. 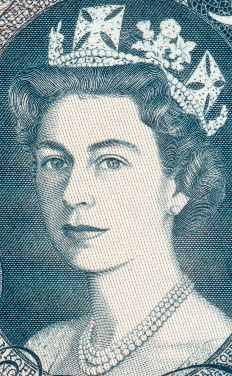 Following the disappointment over Robert Austin’s portrait of The Queen (Portrait 10), the Bank of England decided to prepare a new portrait of The Queen for the higher denomination notes in their ‘C’ series of notes. This portrait was drawn by Reynolds Stone, who was responsible for the design of the 5- and 10-pound notes in the ‘C’ series. The engraving of the portrait was executed by Alan Dow of Bradbury Wilkinson and Company. Austin’s portrait depicts Her Majesty wearing the George IV State Diadem and a necklace of three matched strings of pearls, her preferred choice of necklace for informal and semi-formal occasions. The pearl necklace was given to Elizabeth by King George V on the occasion of his Silver Jubilee, on 6 May 1935. 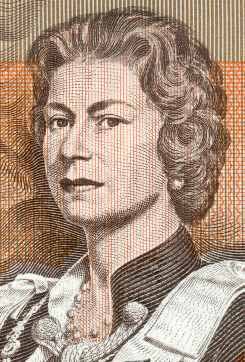 Depicted wearing the robes and regalia of the Order of the Garter, this portrait of Her Majesty is based on a photograph taken by Douglas Glass of London. The photograph was especially commissioned by the Reserve Bank of Australia to provide a portrait from which an engraving could be made for inclusion on the 1-dollar note introduced in 1966. The 1-dollar note was designed by Mr. Gordon Andrews. The Queen is wearing Queen Victoria’s Golden Jubilee necklace and this is one of very few portraits to show Her Majesty wearing a necklace beneath the robes of the Order of the Garter. The Queen is also wearing Queen Alexandra’s Cluster Earrings. The earrings, created by the jeweller Garrard, were a wedding gift from the future King Edward VII to his bride, Alexandra of Denmark. 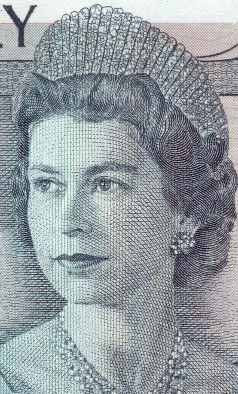 This portrait of Her Majesty is adapted from a photograph taken prior to a Royal Tour of India and Pakistan and it is one of the more widely used images of The Queen. Her Majesty is shown wearing Queen Alexandra's Kokoshnik Tiara, the King George VI Festoon Necklace, and Queen Mary's Floret Earrings. The Kokoshnik Tiara, which is sometimes known as the Russian Fringe Tiara, was designed in the style of a Russian peasant girl's headdress. The design of the Kokoshnik tiara was based on a similar tiara owned by Queen Alexandra's sister, The Empress of Russia. Created by Garrard, the tiara has sixty-one platinum bars set with 488 diamonds. The tiara was presented to Queen Alexandra, while still a princess, on the occasion of her silver wedding anniversary. It was a gift from three hundred and sixty-five peeresses of the realm. The Festoon Necklace was created from one hundred and five diamonds, at the request of King George VI, from diamonds he inherited on becoming King. 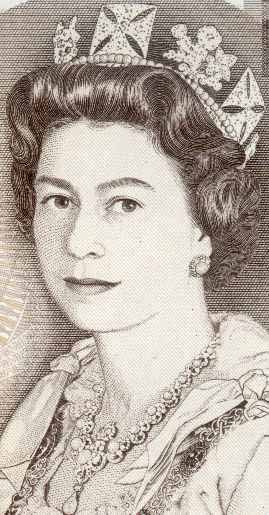 Like the previous portraits of The Queen, which had been drawn for the banknotes issued by the Bank of England, this likeness of Her Majesty is not based on an existing portrait. The master drawing of The Queen was executed by Harry Eccleston, the designer of the Bank's 'D' series. Three versions of the portrait were created. As well as the two version of the portrait described below, an earlier portrait of Her Majesty was prepared by Eccleston for use on the 50-pence and 10-shilling notes, which were never issued. The unused portrait was similar to Portrait 14b, except that in the unused portrait The Queen wore a cap, which is part of the full regalia of the Order of the Garter, rather than the Diadem.

Portrait 14a
This version of the portrait was used on the 10-, 20- and 50-pound notes of the ‘D’ series. The Queen is depicted in state robes, wearing the George IV State Diadem, Queen Victoria’s Golden Jubilee necklace and Queen Alexandra’s Cluster Earrings. The necklace was bought from funds donated by the ‘Women of the British Empire’ to celebrate Queen Victoria’s fifty years on the throne. The necklace was presented to Queen Victoria on 24 June 1887. The earrings, created by the jeweller Garrard, were a wedding gift from the future King Edward VII to his bride, Alexandra of Denmark. 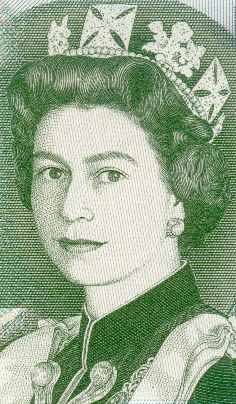 Portrait 14b
In this version of the portrait The Queen is depicted wearing the robes of the Order of the Garter, the George IV State Diadem and Queen Alexandra's Cluster Earrings. This portrait appears on the 1- and 5-pound notes of the Bank of England's 'D' series.

The portraits in this group are official portraits taken by Anthony Buckley. The sitting that produced the photographs on which these engravings are based also produced a number of similar portraits that were used on postage stamps. In this portrait The Queen is wearing Queen Victoria's Collet Necklace and Earrings. (While this necklace is depicted in Portrait 10, the matching earrings are not used for that portrait.) The drops of the earrings are stones taken from the Timur Ruby Necklace, owned by The Queen. Also apparent in the portrait, is a blue sash to which are attached the two Royal Family Orders given to Her Majesty. The first Royal Family Order was introduced by King George IV and Family Orders have been issued by each of his successors. The Orders are worn by female members of the Royal Family. Queen Elizabeth wears the Royal Family Order of her father, King George VI, above the Order of her grandfather, George V. In this portrait, the Royal Family Order of King George V has been truncated.

Portrait 15a
The first version of this portrait can be distinguished by the angle of Her Majesty's head, which is squarely set. This portrait was initially used by Bradbury Wilkinson, but later used by De La Rue when they took over the preparation of the notes. 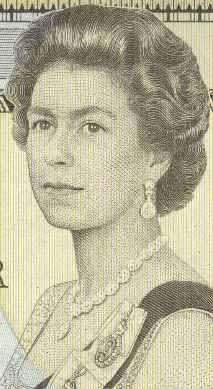 Portrait 15b
This portrait on the Fijian notes shows Her Majesty's head at a slightly different angle to the images used on the issues by the Isle of Man and St. Helena. The difference, not always distinct, can be seen in the slight change of angle of Her Majesty's head. The notes on which this image is used were prepared by Bradbury Wilkinson.

Portrait 15c
This variation of the portrait appears on modified Fijian notes prepared by De La Rue. This portrait is distinct from the other varieties of this portrait in that Her Majesty is looking straight ahead.